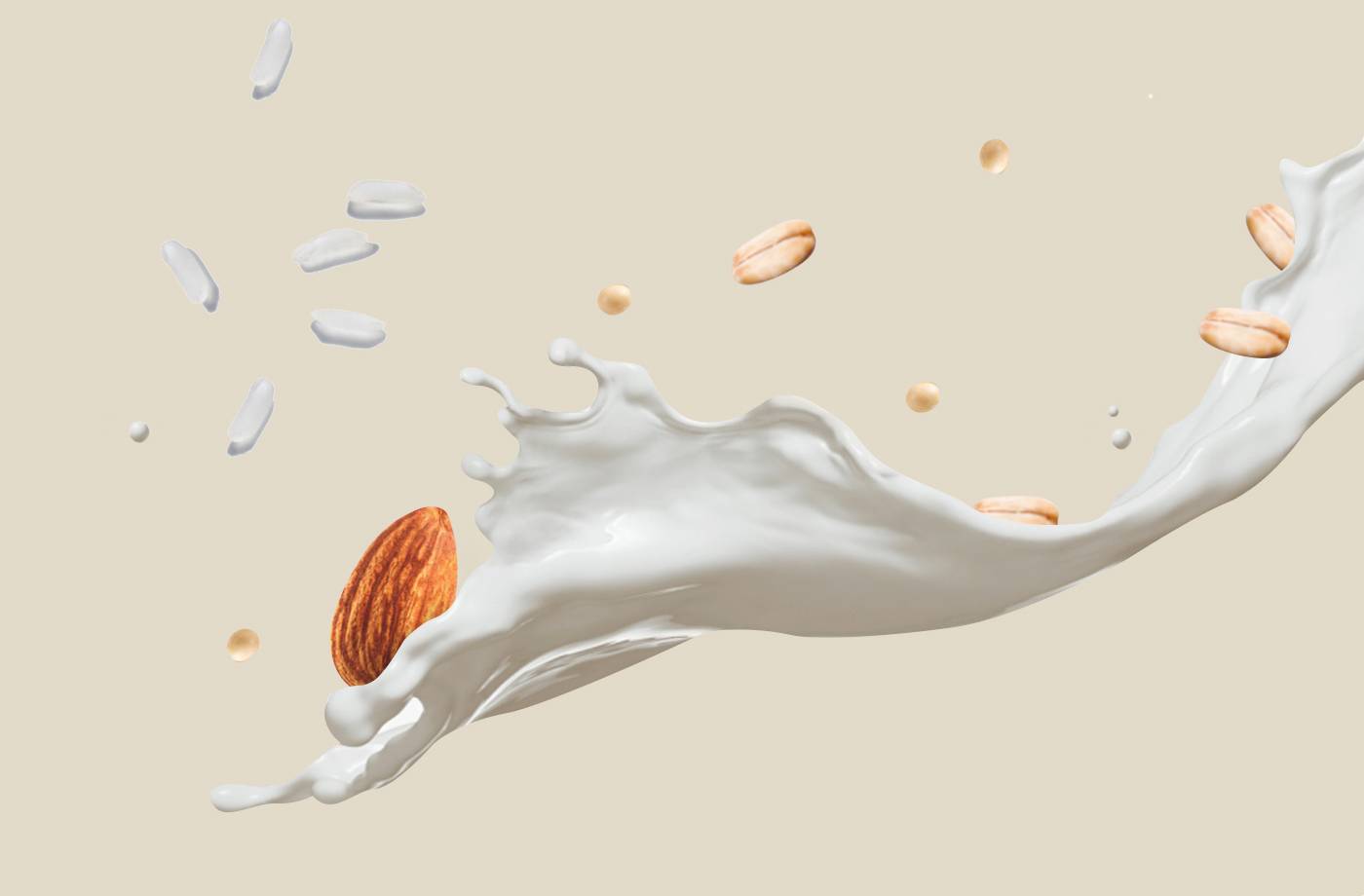 If you’ve ditched dairy for sustainability reasons, you probably assume that alt-milks like oat, soy, and dairy are better for the environment, period. You’re right. But each type of plant milk does have an environmental impact—some greater than others.

However, understanding that impact is still a growing field of study. “There is very little research comparing environmental impact of the various plant milks,” says Sharon Palmer, MSFS, RDN, a plant-based dietitian. Perhaps the best estimates yet come from Oxford University scientists, led by researcher Joseph Poore, who created a database of over 10,000 farms worldwide and extrapolated data from various crops to estimate the environmental impact of soymilk, almond milk, oat milk, and rice milk compared to dairy.

Their conclusion, which was published in the journal Science in 2018: No matter what plant milk you pick, dairy milk is worse for the environment on every indicator—greenhouse gas emissions, water use, land use, and eutrophication (which refers to how that crop contributes to excessive algae and plant overgrowth in water sources from runoff pollution and other factors).

Poore’s research also found that meat and dairy combined use 83 percent of the world’s farmland and produce 60 percent of agricultural greenhouse gas emissions while supplying just 18 percent of calories and 37 percent of protein eaten by humans. “It’s much more efficient to just eat grains, pulses, and vegetables directly as a crop, rather than to grow that crop to feed animals,” says Palmer.

“No product has zero effect on the environment, but if you shift from dairy to plant milk even to some extent you’re doing the environment a favor,” says Sujatha Bergen, director of health campaigns at the Natural Resources Defense Council.

The question of whether dairy or plant milk is more sustainable is more or less settled, but what about the different types of plant milks themselves? That’s where things get complicated.

Rice milk produces the most greenhouse gases of any plant milk—an estimated 1.2 kilograms of CO2-equivalent is produced for each gram of rice milk, per Poore’s data. That’s because farmers flood rice fields, which breeds bacteria in the soil that pump out methane. Rice also churns through significantly more water than most grains, notes Palmer, using over 10 times as much water as soy milk.

Flooding rice fields additionally leads to eutrophication—about four times more than any of the other plant-based milks. Floodwaters sweep fertilizer on rice paddies into downstream rivers and lakes, where nitrates and phosphates cause excessive algae growth that blocks sunlight and takes oxygen from the water. This creates toxic “dead zones” hostile to aquatic life, and they’re found everywhere from the Great Lakes to the Mississippi River. (Keeping things in perspective, rice still causes roughly half of the eutrophication of dairy.)

Curious about the health differences of these milk alternatives? Here’s the low-down from a registered dietitian:

Worst for water use, best for emissions: Almond milk

If you’re heard anything about almonds since the craze for almond milk took off a few years ago, you probably know that they use a lot more water than other plant foods. Specifically, one liter of almond milk requires 371 liters of water to produce, per Poore’s data.  That’s because to achieve the kinds of yields necessary to supply the world’s almond demand, farmers have to use significant amounts of water to irrigate almond trees. Unfortunately, the majority of our almond supply is produced in water-starved California. In the midst of the 2014 drought, almond farmers were criticized for siphoning off groundwater reserves to feed their thirsty plants.

Poore’s team didn’t look at coconut milk, so there’s limited data available specifically quantifying its environmental impact. However, some research estimates that coconut milk production emits about half the CO2-equivalent emissions of soy milk, and all three experts interviewed say it requires little water and energy compared to other plant drinks. “Coconuts are grown places where there’s no water scarcity,” says Bergen. “And coconut trees pull carbon dioxide from the air. You’re not cutting trees down to plant coconut trees, in most cases.”

Coconut milk is often criticized because it usually travels long distances to make it into your mouth: In 2019, nearly three quarters of coconuts were grown in Indonesia, the Philippines, and India. But while there are plenty of reasons to buy local—like having a connection to your food and supporting sustainable farming practices—greenhouse gases from transportation surprisingly isn’t one, says Bergen, especially in the case of unrefrigerated foods traveling by cargo ship, like coconuts. “Transport tends to have a relatively small contribution to the overall greenhouse gas impact of a product,” she says. “The greenhouse gas benefits of having trees pulling CO2 out of the air outweigh the transport.”

With that said, the recent boom in coconut milk has drawn concerns that increased production may be leading to deforestation, notes Bergen, although she hasn’t heard of any specific instances of that happening. And many coconut farmers earn less than $1 a day, although you can choose Fair Trade Certified products to help ensure workers are justly compensated.

Best for water use and health, middling for land use: Soy milk

“Soy milk does have one of the lighter environmental footprints,” says Palmer. It requires the least water of any plant milk (just 28 liters of water to make one liter of soy milk) and has the lowest impacts on eutrophication. Production of soy milk creates more greenhouse gas than oats, coconuts, and almonds, but less CO2-equivalent emissions than rice. It also requires slightly more land than almond or rice, but less than oat—and still pales in comparison to dairy milk.

As a legume, soy offers the environmental benefits of nitrogen fixing—meaning it’s one of a few plants that have a symbiotic relationship with certain soil bacteria that convert nitrogen in the air into the food plants need without the use of fertilizers.

Another factor in favor of soy milk: It’s packed with more bang for your nutritional buck than any other plant milk: One cup serves roughly 6 grams of plant protein and 4 grams of heart-healthy unsaturated fat. “Soy milk is the most nutrient-rich of the plant milks. I choose soy milk because of that issue,” says Palmer, who adds the nutritional considerations are especially important for vegetarians or vegans who need more protein in their diets.

“From an environmental standpoint, I’m a big fan of organic soy milks that are produced in the U.S.,” agrees registered dietitian-nutritionist Malina Malkani, RDN, CDN, a media spokesperson for the Academy of Nutrition and Dietetics and creator of Solve Picky Eating. “Soy offers an excellent nutrient profile and is an environmentally-friendly choice when grown using thoughtful and sustainable farming practices.”

The key is to consider where your soy is coming from. In countries without stringent environmental regulations, soybean cultivation can contribute to deforestation and habitat destruction that negatively impacts biodiversity. In fact, Brazil is the second-largest soybean producer outside of the U.S., and the deforestation for some of those plants threatens the Amazon forest.

“Soy is one of the big monocultures in the U.S., and it’s often grown with too much fertilizer and pesticides,” says Bergen. “Make sure it’s organic and grown as part of a crop-rotation strategy.”

Malkani, Palmer, and Bergen all say that oat milk is a top pick for environmental-friendliness. While oats require slightly more land than almond or rice, they have scarce water requirements—roughly a tenth of what almonds need. “It’s primarily grown with rain water, so it doesn’t require irrigation,” says Bergen. Oat milk is also comparable to almond milk when it comes to low greenhouse gas emissions, and produces significantly less CO2-equivalent emissions than soymilk.

“Most of these milks are the result of monocultures,” says Palmer—an environmentally-unfriendly industrial farming practice that involves planting the same crop in the same soil year after year. Cover cropping, in contrast, has lots of benefits for farmland, such as reducing the fertilizer and pesticide requirements of other crops, diversifying plants to feed more wildlife and insects, boosting soil health, and pulling carbon dioxide out of the air by maintaining live vegetation for a greater portion of the year. “It’s great from an environmental perspective,” says Bergen.

However, other health experts have previously warned that oat products can contain traces of glyphosate, a toxic pesticide that has been linked to serious health issues. So when buying your oat milk, be sure to choose a brand that’s certified organic or states on the label that their oats are glyphosate-free.

Bottom line: Which plant milk is best for the environment?

No matter your choice, the same crop can have vastly different environmental impacts depending where and how it’s grown. Aside from greenhouse gases, water, and land use, Bergen says it’s important to consider an individual brand’s energy consumption—which involves production practices specific to the company, like packaging and waste management.

Unfortunately, learning about specifics like energy consumption and crop sourcing requires a bit of legwork. “Call the company. Ask if they’ve done a life cycle analysis, which looks at all environmental inputs,” says Bergen. “Ideally if they’re making claims about sustainability, they should be able to communicate to the public. The more questions they get will lead to be even more transparency.” You can also shop at your local farmer’s market. “Inquire about how foods are sourced, and how their favorite brands support biodiversity and wildlife,” says Palmer.

Find all of this overwhelming? Rest assured that you can feel good about switching from dairy to whatever plant-based milk you enjoy the most in your morning cereal or latte. “Plant-based diets are eating patterns that are consistently linked with lower environmental impact,” says Palmer.

In fact, if everyone on the planet switched from dairy to soy, the Oxford researchers estimated that it would save nearly half a billion hectares of land, a billion tons of greenhouse gases, and 250 km cubed of irrigation water a year—the same effect as if everyone in the world stopped showering and bathing for a year.

Call me convinced. As a kid, my three-person family went through a gallon of cow’s milk every day. For the new year, I swapped my dairy for 50/50 oat and soy milk in my daily morning oatmeal. Hey—every little bit counts!

Looking for more comprehensive know-how on sustainable eating? Here’s your guide to buying meat, dairy, and eggs ethically and sustainably. And here’s how to do the same for fish and seafood.