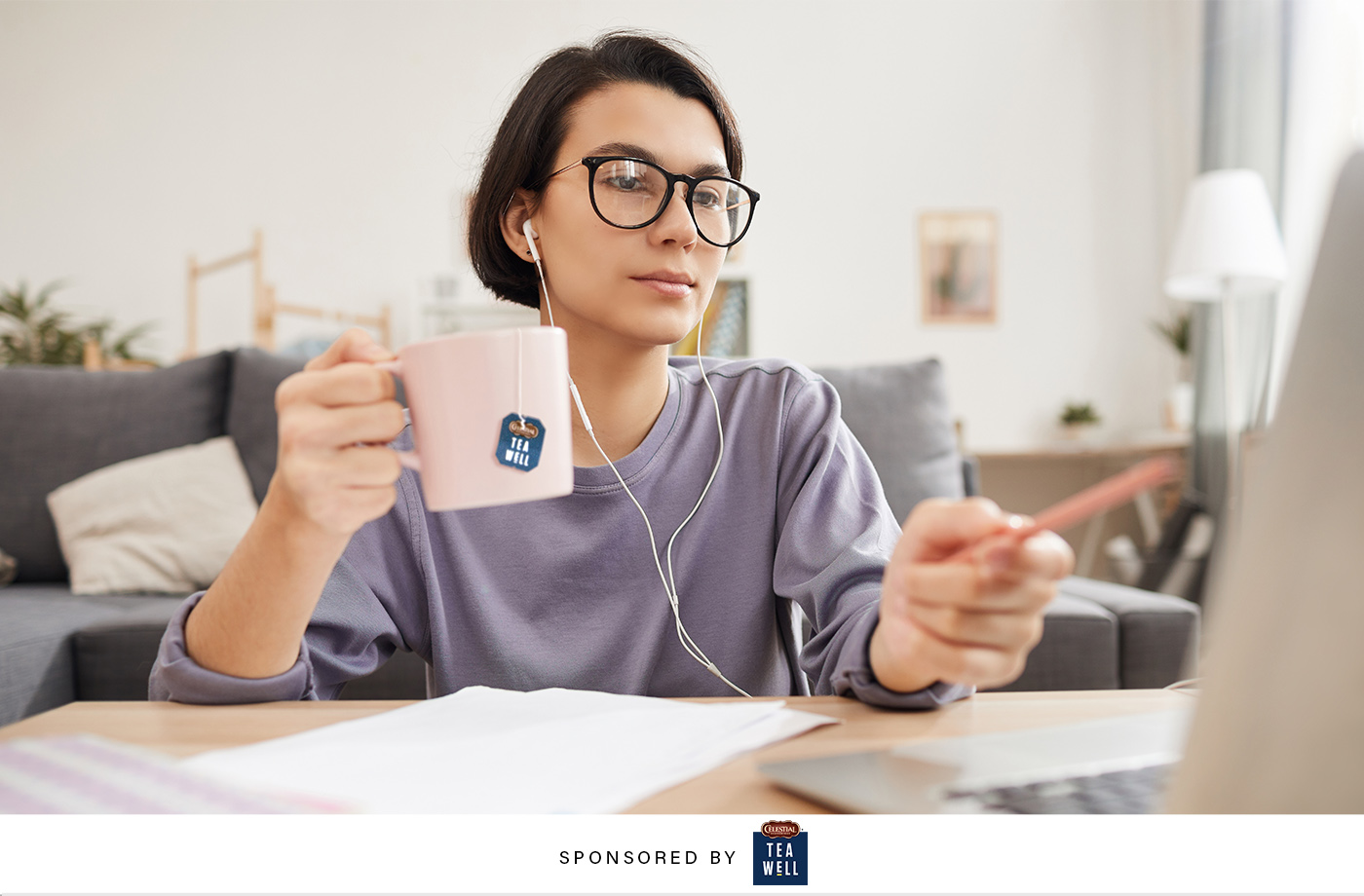 I’ll just come right out and say it: I love coffee. I love the taste, the way it smells, and the act of ordering it at a coffeeshop. Even forking over that extra dollar for oat milk brings me joy. The one thing I don’t love? Feeling like I’m dependent on it.

Don’t get me wrong, it’s not like I have an IV of dark roast hooked up to my arm—two cups is usually good enough for me—but lately I’ve needed those 16 ounces to transition from someone who barely hears her sixth alarm to the cheerful, productive, full-of-good-ideas editor I try to be.

As a reset, I decided to quit my coffee habit for a week, and tap into the benefits of drinking tea instead. To fuel my new tea habit, I stocked my kitchen cabinet and desk drawer with Celestial Seasonings TeaWell wellness teas, which aren’t your typical English breakfast. I figured if I’m going to give up my beloved coffee for a week, I should probably replace it with something even more beneficial, right?

TeaWell teas come in nine distinct flavors—ranging from turmeric spice to ginger mint—each of which boasts benefits such as supporting digestion, immunity, and mental vitality. Less coffee and less brain fog? Totally here for it.

Keep scrolling to find out how my week without coffee went, plus my favorite benefits of drinking tea.

Let me be clear: While I excitedly agreed to trade in my coffee for the week in favor of tea, I definitely did not agree to quit caffeine cold turkey (I’ve tried this before and it wasn’t fun).

Tim Collins, general manager at Celestial Seasonings, didn’t recommend the cold-turkey approach either when I asked him about the best way to go about my tea transition. Instead, he pointed me toward TeaWell’s three caffeinated options (the rest are herbal): matcha green, green tea with grapefruit, and mint guayusa, each with about one-third to one-half the caffeine of a regular cup of coffee.

Each morning, I’d start the day with one caffeinated cup and see how I felt from there. If I’m being honest, I’d usually need a second cup, but then I’d switch to herbal for the rest of the day. “Many people tell us that they feel like tea provides steadier energy,” Collins says, and I was definitely living that no-jitter life.

Teas can have loads of benefits

I already knew there were plenty of benefits of drinking tea (studies have shown that tea drinkers may have lowered risk of illnesses like cardiovascular disease, and a more recent study connects drinking tea to improved brain health), but what I didn’t know was how powerful the individual ingredients could be.

Every TeaWell tea is centered around a daily wellness core of green rooibos, dandelion root, elderberry, and panax ginseng, which are all touted for their ancient benefits.

“Dandelion has been used as a digestive stimulant in traditional European herbalism for centuries,” says Gina Osburn, Celestial Seasonings director of research and development. “Elderberry has been used around the world since ancient times to help support a strong immune system, and panax ginseng has been used in Asia to help revitalize the mind and fight fatigue.” The more you know, the more you’ll want to sip, tbh.

Like I mentioned, I love how coffee fits into my morning hustle, but throughout my java-free week, I realized tea has even more of a mindfulness-boosting routine involved.

Each a.m., I chose the flavor I wanted, warmed the water, and let the tea bag steep. And because there were a few steps involved, I actually had to stop what I was doing and just focus on brewing my tea (being present in what I’m doing is one of my 2020 goals).

“We’re all hearing about the positive impact of creating a deliberate mindfulness routine, but also how challenging it can be to find the time to do so,” Collins says. “Taking a few minutes a day while your tea steeps is a great way to start, and certainly, lingering over a cup of tea has to be one of the great joys in life.”

So will I be giving up coffee for good? Not yet. But I will be continuing to sip tea daily—a girl can have both, right?

Want to do a tea week (or month… or year) of your own? Click here to find out where to buy TeaWell teas near you, and start sipping.