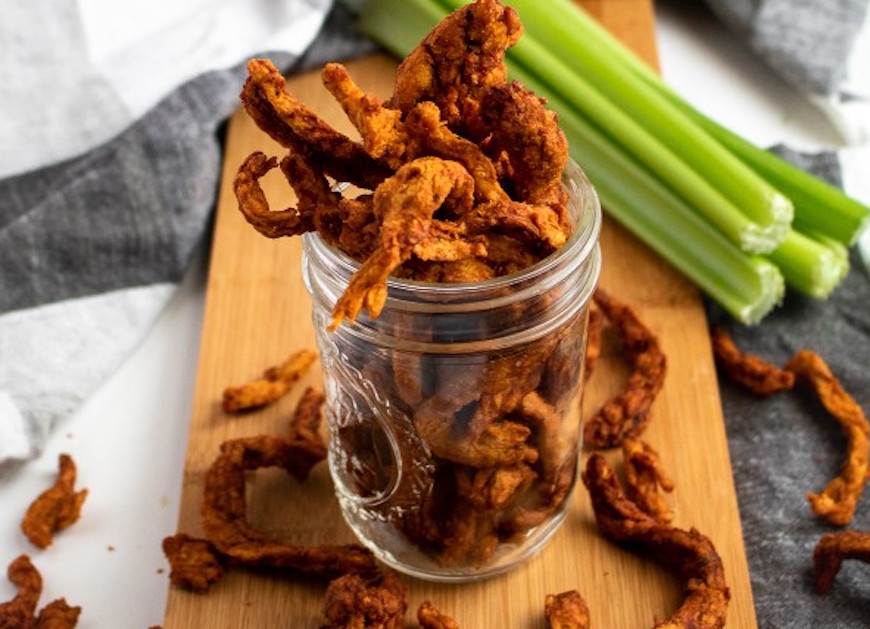 In the past few years, traditional beef jerky has gotten a major glow-up, revamped from the ultra processed sticks ubiquitous at gas stations and remade to be sourced from grass-fed meat and lower in sodium. The jerky space has also expanded to include new, vegan varieties. A run-down of the few options on the market: mushroom jerky, watermelon jerky, and soy-based jerky. Still, the vegan options definitely aren’t as easy to find as their animal-based counterparts.

No worries, you can make your own! If you are the proud owner of an air fryer, it’s easier than you may think to DIY. Rounded up here are eight vegan jerky recipes using the beloved kitchen appliance.

Scroll down for eight vegan jerky recipes, all made using the air fryer

Part of what makes traditional jerky a good snack is all the protein, and using soy to make a vegan version ensures you don’t miss out on that front. This recipe calls for liquid smoke, hoisin sauce,  cayenne, garlic powder, and onion powder, which makes it taste like it was cooked over an open fire and seasoned with your pantry’s all-stars.

If a smoky taste isn’t your thing, try this Southern-inspired take instead, which uses nutritional yeast, Cajun seasoning, and poultry seasoning (don’t let the name fool you—it’s still vegan). Cornmeal is used to give a breaded texture; this take is much healthier than a deep fried version.

Part of what makes tofu so great is that it acts as a sponge, soaking up whatever spices you cook it with, and it remains true in the jerky making process. This tofu jerky definitely has some kick thanks to the Sriracha, but also has a hint of sweetness.

If you’re looking for a vegan jerky recipe that still tastes like meat but isn’t made with soy, eggplant can work just as well. The texture and crispiness is surprisingly similar to bacon—a plant-based miracle!

Vegan jerky for brunch? Don’t mind if I do! The soy curls are seasoned with veggie bouillon powder, celery salt, and paprika while they cook right in the air fryer. While it’s cooking, you can make the sauce, which combines Worcestershire sauce, tomato paste, hot sauce, horseradish, liquid smoke, maple syrup—and an optional addition of vodka.

Hands down the most popular way to eat traditional jerky is in the form of pepperoni. Meat-lovers wouldn’t dare to eat a pizza without it—and now vegan eaters don’t have to either. The smart spice blend is the key to getting this one right: be sure to have crushed red peppers, ground mustard seeds, fennel seeds, paprika, garlic powder, coconut sugar, and ground anise all on hand.

Not all jerky has to taste like meat; fruit jerky can be a refreshing snack to keep stashed in your pantry. Follow this recipe to convert peaches into a fruit roll-up-esque snack. The only ingredient you need is literally just the peaches.

Strawberries are another fruit that taste delish in jerky form. They’re made the same was as the peach ones—with the addition of a bit of lemon juice to brighten up the flavor even more.

Here are six more healthy recipes to try using your air fryer. And you know about the Instant Pot Air Fryer, right?